I had never really been sure that I would finish this walk in its entirety. Oh, I knew I would finish at some point, but it might very well not coincide with where the trail would finish. And I’m honest when I tell you, that for the vast majority of my walk, it didn’t really matter, I was not here to prove anything or to bag any medal or associated identity-capital with walking across America. Now that I’ve “done did it”, hell yeah, I’ll tan in that recognition ’till the day I die, but it was never about that. And if it had been, I’m pretty sure I would have failed royally. Catch 22.

I was so conscious about not “enslaving” myself to the trail that I, willfully and childishly, rejected the challenge before I even started. So instead of starting at the actual start, the US-Canadian border that is, I chose to walk a 25-mile approach trail that intersected the Pacific Crest Trail 17 miles south of the border. Take that PCT, I don’t need you, don’t need anything, fuckin’ nothing, and I will never be able to walk the entire trail cause I didn’t even try, didn’t start at the start. Free as the birds that sang around me, I started my walk. I’m here to enjoy the scenery, photograph, tire myself out, be humbled, embrace simplicity and photograph some more. And… to think about life, values, priorities and discuss, with myself, concepts like anger, fear, hatred, love, compassion, patience, empathy, stillness, dreams and despair. Not so much “to find myself” as many might call it, cause I already kinda new who I was and what my “call” is and all that. But many years of intense adventures, cycling around the world and floating a homemade bamboo raft down The Amazon needed to settle in my mind, be processed and produce something deeper than just great photos and wild stories. I needed to calm myself and, ironically, walking a marathon a day, through the wilderness, will do just that to most people, me included. As a 32 year young man, that was likely the biggest reason why I went out for a walk.

As days turned to weeks that turned to months, admittedly, I started to smell blood. Maybe I could walk the entire trail, just maybe. Wow, that would be cool, imagine if I could, literally, walk across the USA through the wilderness. Better yet, that meant that I had lots of miles and months left on the trail, the Pacific Crest Trail, which I by then had started to lift out of the “dead box” and giving it living attributes. I cursed it, I was in love with it, I asked it, I hated it, I got insulted and vehemently jumped to its defence if people called sections of it “boring”. By then, it would have take an immense shift or tragedy to get me off trail, not because I felt I “had”, or even wanted, to complete it but because I was ready to fight for my love, to stay with my baby, my beloved PCT and was not gonna divorce her unless the skies came trembling down. I felt like I belonged there on the trail, in this world, and that sense of belonging truly is one of the most rewarding and addictive feelings.

But the trail was not fully over yet, I still had some 200 miles to go. I got increasingly sure that I would be able to walk the entire trail, as long as I didn’t get hit by any serious injuries or attract a severe stomach infection from the more-than-dubious water sources I was surviving on. I had even shouldered the challenges of the desert, which I wrongfully had assumed to be flat and easy, but found to be mountainous, lonely, fearfully dry and the perfect place for blisters to multiply like cockroaches in a sewer system.

I wake up at 4 in the morning, after almost 10 hours of sleep. You do the math. Out here I go to bed earlier than my 3 year old niece does. It’s dark and cold and the sun won’t rise for the next couple of hours so I pack up camp and start walking with a headlamp, that’s how it’s been for the last couple of days. But today is different; completely, entirely, incomprehensibly different. There is 20 miles of trail left and “my world”, the trail, will come to an end. It’s an utterly ambiguous feeling and I was almost wishing that time didn’t happen and that the sun wouldn’t rise. This daily spectacle is miraculously beautiful, and there is nothing I can do to stop it. I walk for 3 hours and thereby cut the distance between me and the Mexican border in half. Eat brunch, but not the brunch you eat at the hipster-cladded cafe, ain’t no food to rave about out here. Almost cried as I ate that last meal on trail. Walk on.

And there it was. A dilapidated, old wooden monument set against a barbed wire fence. The Mexican Border, the end of the trail, though it is the beginning for most hikers, as 95% who walk this trail go north. I just stood there and stared at it. Sat down in the sand as the wind continued it’s soft song in my ears. Popped a beer, sipped it, gazed around, confused. Didn’t really know what to do with myself, guess I’m supposed to take that photo that I’ve been thinking about for the last 2 weeks. Not surprisingly, it was anti-climatic and it didn’t merit a celebration whatsoever, contrary, I found myself in a weird emotional drift of anger and kicked my backpack in frustration when my camera wouldn’t balance for a self-timer shot. Had never kicked my loyal backpack before, what’s wrong Henrik? The end of infinity. What now?

Through the wilderness, I had walked across America. 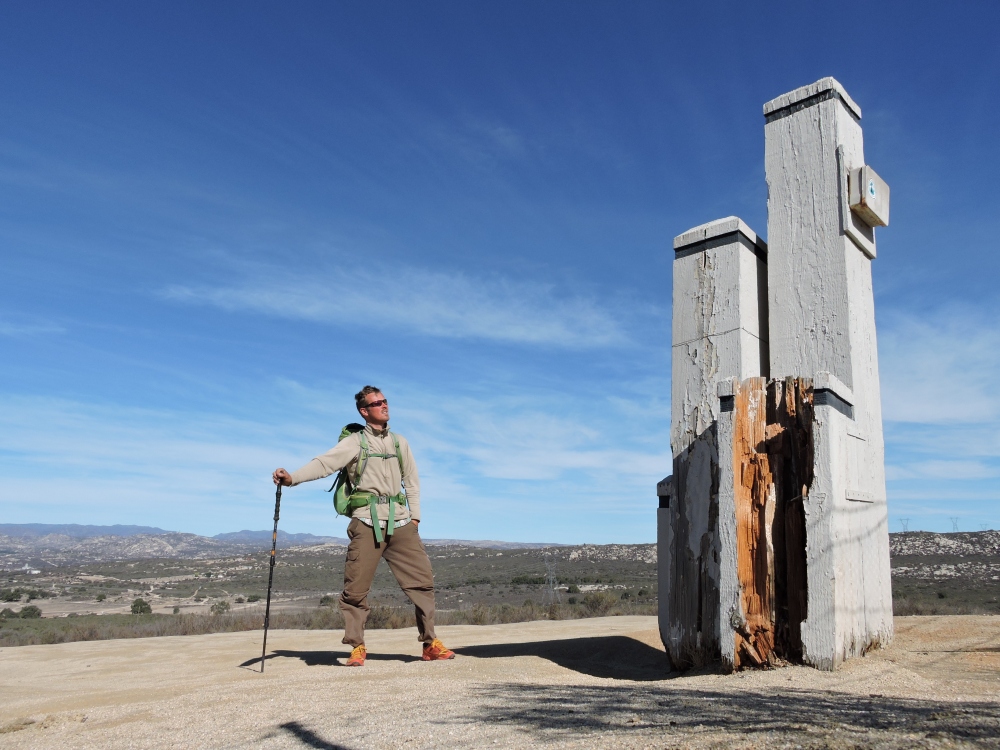